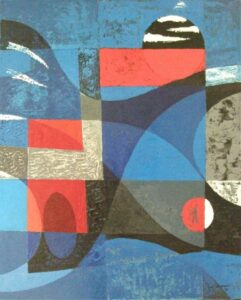 Juul Neumann, born in Amsterdam in 1919, was a student from Ger Gerrits from 1936 on. He became friends with Berend Hendriks with whom he shared a studio in Amsterdam during the second World War, and where he made his first paintings.

Just after the war, and influenced by Cubism, Neumann's paintings developed from figuration into work of a more abstract nature.

Juul Neumann joined the 'Onafhankelijken' group in 1946, together with Hans Ittmann. Took part in exhibitions from the 'Vrij Beelden', 'Creatie' and 'Liga Nieuwe Beelden' groups.

Neumann started to add a number on his works from 1949 on. Starting 1954 his compositions became more geometric, a style he continued on various exhibitions with the 'Liga Nieuwe Beelden' group between 1955 and 1960.