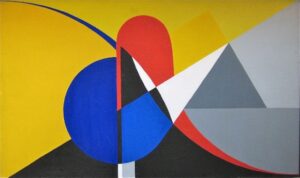 In 1929 , Warb settled in Paris and attended various academies in Montparnasse (including La Grande Chaumière). On the intercession of Kees van Dongen, Warb was invited to work as a stylist at a number of Parisian fashion houses in order to support herself.

Nicolaas Warb occupied herself in her leisure time with music (jazz). In 1939 cshe had contacts with Georges Vantongerloo. Through him Warb arrived at a constructivist way of working to which she added her own freely-devised elements.

Nicolaas Warb's work can be viewed at the Stedelijk Museum in Amsterdam.